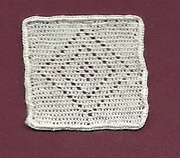 This sample was worked using the wrap-around-the-thumb method.

Hollie Point is an English needle lace, made entirely of twisted buttonhole stitches, with the design made by the holes worked into the rows.  It was often used for infants' clothing and usually had either geometric or religious designs.  A design worked out on graph paper can be used for this type of lace.

Catherine Barley's book NEEDLELACE: DESIGN AND TECHNIQUES, CLASSIC AND CONTEMPORARY, 1993, reprinted 2001. Has a chapter on Hollie Point. A very good book. This is the one most often recommended as an intermediate level book, to follow the Guild of Needle Laces or Grimwood.

As we find information, we will post resources here.

This group does not have any discussions yet.

You need to be a member of Hollie Point to add comments!

I was making lace with the Victorian Branch of the Australian Lace Guild, last Sunday, in the National Gallery of Victoria. I was showing Needle lace (the others were all doing different bobbin laces.) Afterwards we took a quick look at a special exhibition of embroideries - and there, amongst all the samplers from the 17th & 18th Centuries was one tiny piece of Hollie Point, worked in 17??

At first I thought it was a bit of cream fabric divided into squares by some coloured tape or ribbon, but when I read the label it said "Hollie Point"!

Well, I leaned over the cabinet to get a closer view, and I could just see light coming through the 'holes' between the stitches. The bottom square I could see through was of Gros Point type diamonds in the finest thread you can imagine - about as thick as a fine hair!!!  How anyone could see to do such work is beyond me!

The embroideries were nicely sh won - obviously by someone who knew hand works, as they were placed on a glass shelf, with a mirror on the bottom of the cabinet, - so we could see the back of the work!  How sensible!!

I was amazed, though, to find this tiny piece of Holly Point in amongst Samplers, Brazilian embroideries, etc.  Each square was only about an inch square, and there were just 6 squares, if I remember correctly, so it was just a tiny piece, beautifully worked. Awesome.

18th Century Embroidery Techniques by Gail Marsh. GMC Publications, Great Britain. 2012. ISBN 9781861088086. Cover price in the US was 19.95. There are only three pages or so, but the rest of the book is a great intro to the period embroideries. I purchased mine in June. Hope others can enjoy it! It doesn't look like I added the catalog info to the database, sorry.

Laura: thanks for info on the Marsh book. Please tell us publication date, publisher, etc.  I have added it above.

As I was going through Gail Marsh's book 18th Century Embroidery Techniques I came across a few pages on hollie point.  The stitch illustration isn't as fine as Catherine Barley's, but it's pretty clear and makes sense.  Also has some lovely embroideries and instruction for simple Dorset buttons.

I leaned just from the Catherine Barley book.  there is not a lot about how to do it in any other book that I have found. The Barley book is the most comprehensive.

Selena:  Look next to the icon above.  The book by Catherine Barley, mentioned there, has a chapter on Hollie point.

Selena, for some reason I cannot find your comment about Hollie Point.

Trying to work out where the next hole will be in a solid area was what I found hard! I have just worked a small piece - can't show a photo yet, as it has gone into a competition! I was not really happy with it, but is is another piece entered!!  It was not an easy lace to work.

I used the thread round the thumb method of making the twisted stitch, and got on Ok.  It seems to keep the stitch in a bundle, not pulled out to a long stith,and by my reading of it, that is how the stitch should be - short and lumpy!  It is very Intense to work, and so slow!!!

I think maybe it is all those acres and acres of twisted stitches!     Intimidating.