I've started my next project!  It is a rooster (cock or cockerel to some, but as I live in a house with a toddler, I must call it rooster to avoid teaching the wee one a word which might embarrass her parents later).  I picked up the pattern here, and modified it only a little.

Since I plan to experiment a bit and learn new techniques, I'm starting this discussion so I can ask questions and advice all in one spot, and be able to find the answers without too much hunting later.  Of course feel free to comment on the photos individually, too.  I've posted a few head pictures in my rooster album.

My goals for this project: work with different weight threads (thanks, Teri!), learn new filling stitches, enliven the corded Brussels stitch in some ways, do something with a laid grid background, and practice picots.

So far, my first attempt at enlivening corded Brussels is not working.  In the comb, I tried to do a gradient by starting next to the head with very closely worked stitches, and then getting looser as I got farther away.  I think the method has promise, but in a bigger space.  The comb is too small a space to really show a whole gradient, so it just looks like I started tight and got lazy.  I shall pick it out and start anew.  Any ideas?  Maybe I'll do a looser version of the stitch following the contours of the comb, instead of working across in neat rows.

Speaking of corded Brussels, can anyone point me to good directions for how to make the little holes in that ground (holes which themselves make patterns)?  Like a flower petal done in corded Brussels, but with a row of holes that suggest a vein?  I see it all the time in lace, and so far haven't figured out how it's done.

My laid grid on the rooster's breast was partially inspired by the original pattern, and partially inspired by Catherine Barley's California Poppies background, which I like.  I tried to replicate it, and learned along the way how to reliably knot the intersections so they wouldn't slide around, but I couldn't get her cute buttonholed rings with picots.  Instead, I did a woven wheel stitch which worked out well.  I'll try gridwork again later in the design.

And finally, to soften the line between head and breast, I overlaid some lighter-weight thread in a whipped Brussels stitch.  That is something I see often in Mia Dvorak's work, and I think it's cool.  I worked my overlay in all-purpose thread, since that's what I have.

Can you tell I'm excited to be starting a new project! :)

Replies to This Discussion

Permalink Reply by Maureen Bromley on January 9, 2014 at 1:19pm
Hi. The place to see the diagram for the point d'Espagne twisted Brussels stitch is the Lace app that has been done for an iPhone or iPad. This was prepared by David and Jean Leader in Conjunction with the Lace Guild in UK. It can be found in the Grounds section for Point de Gaze which now has diagrams to match the pictures of the grounds. In my opinion it is an app well worth getting and is only about 3 dollars I think. It is shown in various books but I guess that they are not easy to get as most are out of print. I am lucky, I think I have just about all if them.

Is there a version for pc?

I also have a diagram on my website   http://lynxlace.com/needlelacestitches.html   It is approximately in the middle of that page.  (If everybody agrees with my diagram.)

The app sounds cool, but I have no mac stuff.  Unfortunately, according to Leader's website, "at the moment we are only developing for Apple iOS devices."

My LEAF 10 tutorial has some photos which may be helpful.  Unfortunately the light colored thread doesn't photograph that well.    http://needlelacetalk.ning.com/group/beginners/forum/topics/needlel...    Look especially at all the photos in the first paragraph, and the last on in paragraph 2.  Also the last paragraph on that page.

Between all the photos, diagrams, and explanations, I think I've got it!  Here's my experimentation: 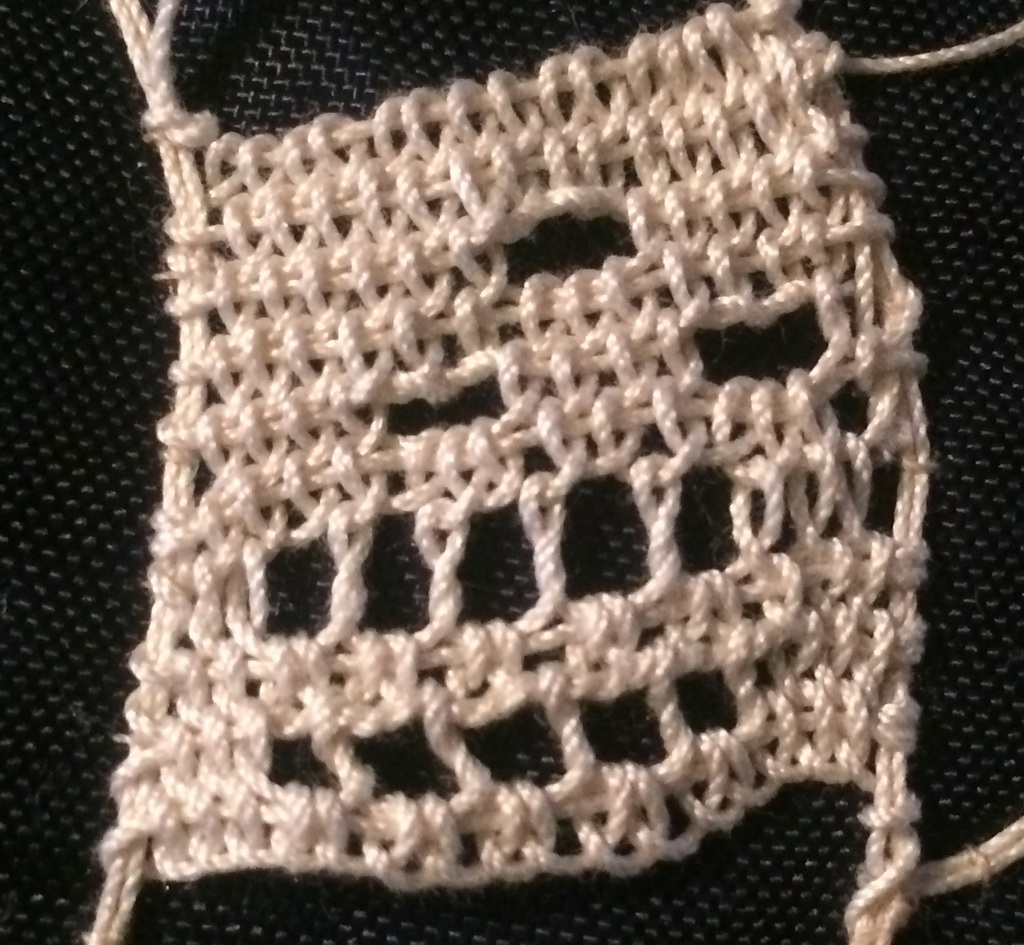 The first little hole, I pulled my whipping stitches tight, which drew the top of the hole up for a rounder effect.  The second two holes I did not tug the whipping stitches snugly, which led to a wiggly effect at the tops.  The first vein I made by starting with Brussels stitches, then when I was ready for the holes, skipping a stitch and proceeding with point d'Espangne in every other hole.  I thought the edges looked too airy, though, where the Brussels stitches were, and the top of the Point d'Espagne stitches was wiggly because it depended on single loops.  So for the next vein, I started by laying cord, whipping it for the length of the vein, and then going back with corded Brussels on the edges and point d'Espagne in the whipped area.

One thing I noticed was how hard it was to center my dots by eye alone.  The stitches I whipped looked like the center, until the hole was done.  When I'm ready to work dots into a design, I think I'll have to mark their positions on the pattern or with pins.

You have done well, and obviously understood what was being said.  I think for veins in petals, leaves etc, they probably only go part way across the row so therefore you dont get edges that are two airy.  And looking in all my books, each author has a different way of doing it anyway.   Yes it is difficult to get the holes where you want them by guessing as you go along.    I tried that and the dots ended up in the wrong place and where too low.   So I found it was best to mark the position of the dot or vein before I started that section.    I often dont to it in the planning stage so have to prick a dot where I want to put them .  Mostly it works.

Yes Lorelei, I agree with your diagram.  I felt sure you would have it somewhere.

Permalink Reply by Teri Dow on January 10, 2014 at 11:19am
Maureen, thanks for the lace app recommendation. The layout is pleasing and the historical content brief and interesting.

I'm back with a question about point d'Espagne.  Does it matter which way we make it, so long as we get the double-twist?  When I first learned it, I learned to bring the needle to the outside of the stitch and wrap around and in, but while working with my rooster, I discovered that I could get the second twist by bringing the needle to the inside of the stitch (a normal Brussels stitch), and then wrapping a second time.  Is that the same stitch, or is there a different name?

(Incidentally, I'm going to be incommunicado for about a week, so when I don't reply immediately, please don't think it rude.  I just wanted to type my question before I forgot it!)

I think you get the same result. But I'd like to hear from the experts.

To answer your question on point d'Espagne Karen.  As long as you are getting the double twist on your stitch and you are achieving the correct stitch and are happy with your work, then it doesn't necessarily matter how you achieve it.  The aim, I think, it to achieve as neat and even a tension as possible and to enjoy what you are doing.    There are several ways of working your lace, either on a needlelace pillow, in your hand, with the needle pointing towards you, the needle pointing away from you (continental style), or needle pointing either to the left or the right.  All these ways are not wrong and as long as they work for you, then carry on.   I work and teach several different ways so that it is most comfortable for the person who I am teaching.    In my mind, it is a case of 'if it ain't broke, don't mend it'.  Post a close up photo of your stitch just so we can see what you are achieving.   (And I am replying whilst I think of it so I hope you don't miss it.)